Hugh Stevens - Synergy
Stick to your knitting
Profile: Hugh Stevens
Synergy Chairman, Hugh Stevens, has been at the helm of the company for more than 40 years. 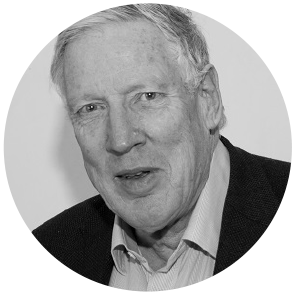 Here Hugh shares his recollections of how Synergy has grown and developed over the last 40 years.

Disillusioned with working on the accounting systems at Hoover, Hugh realised his real passion lay in software development. So, in the late 1970s, when a software company, based in Hitchin, Hertfordshire, was advertised for sale in the Financial Times, Hugh seized the opportunity to follow a more rewarding career path.

Founded by Harry O’Brien in 1972, Hugh purchased a 30% share in Synergy Logistics to work alongside venture capitalist Peter Brown. At that time, Synergy’s main focus was vehicle route scheduling and had a number of big-name clients including Tesco, ICI, Cadbury-Schweppes as well as breweries including Vaux, Courage and Whitbread.

An article in the Financial Times dated 15 January 1976 read: “The realisation among companies that distribution is the great unchartered cost area has brought considerable business to Synergy Logistics. In recent months it has been particularly involved in selling advice – for between £2,000 – £5,000 – to companies that are planning new depots, buying new vehicles and assessing routes.”

Using OS maps as a reference point, Synergy had developed the Roadnet system to grade roads and plot optimal delivery patterns as well as frequency and loading schedules. It was primarily “a matter of maths and proving the system worked,” says Hugh. However, basing the system on a static OS map without any topographical or traffic information meant there would always be variables that could not be planned for.

It was also a niche market so when Kodak approached Synergy in the early 1980s to develop a software system to help it navigate the increasingly complex field of Customs & Excise, Hugh and the team developed a suite of five management systems – Importer, Exporter, In-processor, Out-processor and Warehouser.

The software proved to be a huge success and Synergy’s client list grew at an impressive rate, bringing on names such as Motorola, Hewlett Packard, Saab, General Motors, Nissan and Canon.

The next significant milestone for Synergy came in 1985 when the company was asked by Unilever to write a warehouse management system. Hugh recalls: “I had no experience whatsoever of WMS – in fact I think there was only one other product available around that time called Dispatcher (later to be bought by JDA).

“I did have some experience of an MRP system from my days at Rolls Royce so I knew that it was based on the ‘double entry bookkeeping’ principle of accounting. If something is moved from its starting point it needs to be accounted for elsewhere in order to keep balance.”

And so, working with colleague, Andre Botin, Hugh wrote one of the world’s first warehouse management systems, Locator. “It wasn’t brilliant, but it got the job done,” says Hugh.

With an ever-growing portfolio of software solutions, Hugh felt the time had come to focus on just one market. The road transport side of the business was always very maths-based, which had never much appealed to him. The Customs & Excise division was constantly at the mercy of ever-changing HMRC regulations and so it was decided to focus on the warehouse management side.

Moving in to the 1990s, an exciting opportunity came along when Synergy won the contract to deliver a WMS for Coca Cola, which was building what at the time was the world’s largest distribution centre at Wakefield in West Yorkshire, across 41 acres and 72,000m² of buildings. Rising to the challenge, Hugh and his team worked with Coca Cola to further develop Locator in to Locator Expert using PowerBuilder on the latest client server technology.

The turn of the century marked the start of the dot com era and in a bold move that was to leave other software developers in the starting blocks, Hugh set about designing a brand-new WMS, specifically engineered for the web. “I quite quickly realised that this was the future for software,” says Hugh. “The big players like IBM were still focussed on developing massive on-premise mainframes, but I was convinced our industry was heading to the cloud.”

SnapFulfil was officially launched in 2007. Utilising Adobe Flex and Microsoft.NET-based C# programming, it was one of the first cloud-based systems to offer real time information to optimise warehouse management without sacrificing any functionality. Furthermore, it’s unique rules-based configuration engine has enabled it to stay ahead of the curve, providing a highly flexible solution that is now used in warehouses around the world.

Included since 2012 in Gartner’s elite WMS Magic Quadrant, today Synergy has a global footprint with offices in the UK and North America. It continues to pioneer with remote and self-implementation capabilities that empower customers to handle their own multi-site rollouts and develop more sustainable business models.

Hugh puts much of Synergy’s success down to two key factors – focussing on what you’re good at and staying ahead of the market. He says: “My mantra is stick to your knitting! It’s easy to be distracted by market noise but our specialism is warehouse management and I never lose sight of that.

“We have survived for half a century by looking ahead. Rather than fearing change, I’ve always embraced it, anticipating what’s next and investing today in tomorrow’s product.”

Hugh's first experience of the corporate IT world was with IBM in the 1970s, where he qualified as an accountant. This was followed by spells at Touche Ross (now Deloitte), Rolls Royce and then Hoover.

By continuing to use the site, you agree to the use of cookies. more information